(This article is Part One in a series of articles on emerging markets in the Pokemon Trading Card Game.)

The Pokemon TCG market is a dynamic place where trends, classics, new, vintage, favorites, and niche interests all push and pull at the will and wallets of collectors around the world. In between the cadence of new sets and the consistent buzz around the originals, the trophies, and the rarities, new interests can be found flourishing. In my Emerging Markets series, I look at some of the newer markets growing in the Pokemon TCG to see how they’re growing, where the interest came from, and what makes them special.

World’s Promos have been around almost as long as the formal Pokemon World Championships. The first Pokemon World Championship was held in Seattle, Washington in 2002. This was a spiritual successor to and structural formalization of the prior tournaments Wizards of the Coast put on, such as the Tropical Mega Battle events held between 1999 and 2001. In 2004, when Nintendo put on their first World Championship post-transition of Pokemon’s ownership from Wizards of the Coast, an exclusive promotional card was given to all staff members and competitors in the event. “Tropical Wind,” Nintendo black star promo 026, memorializes the event and dawns a gold-embossed “Worlds 04.” 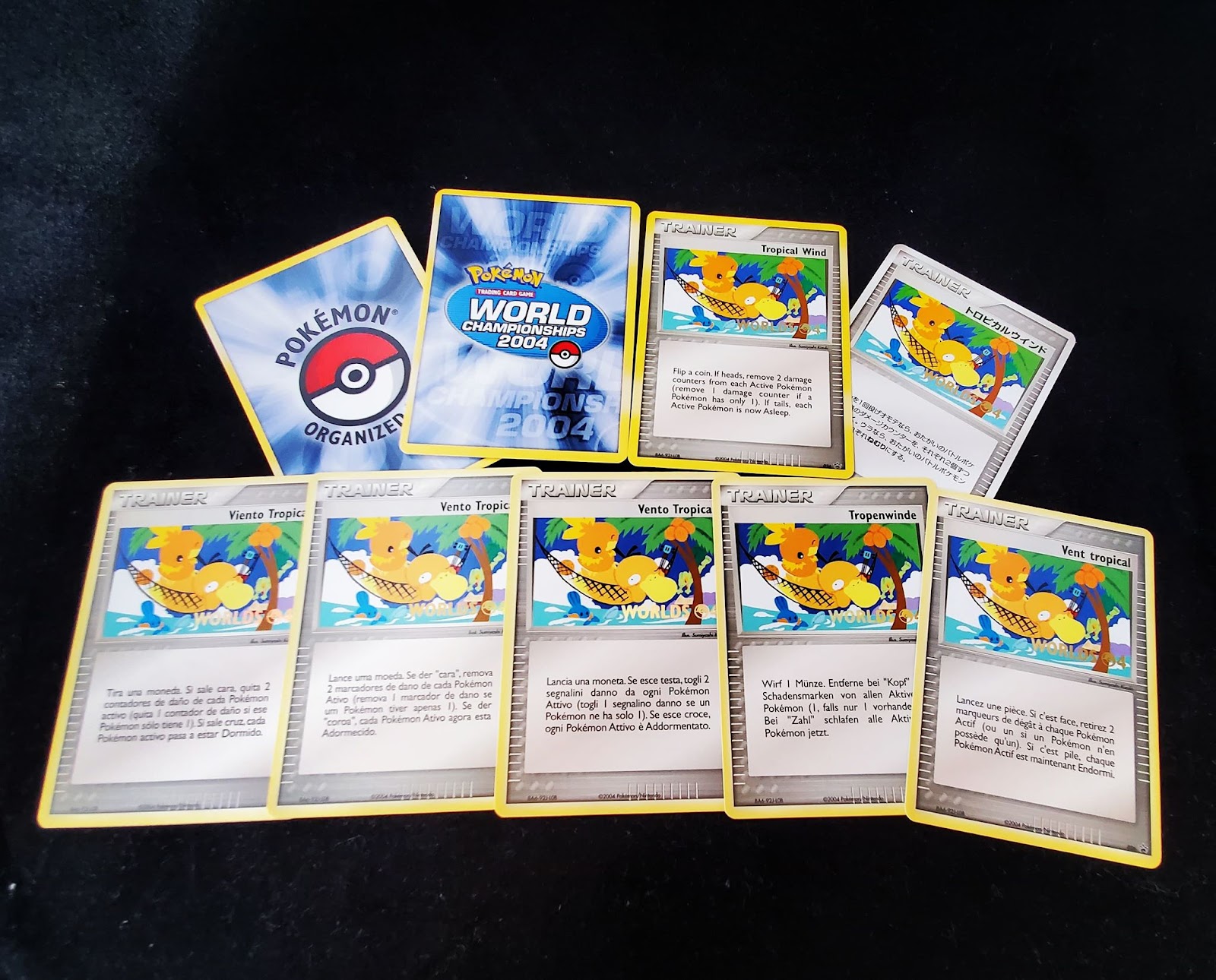 Players received the promo in a 9-card set featuring 2 thin inserts (used to fill out the 9-page pockets commonly used for binders) and 7 Tropical Wind trading cards, each in a different language representative of languages spoken by attendees who came from around the world. Staff copies were exclusively English and sport a “STAFF” stamp at the bottom. 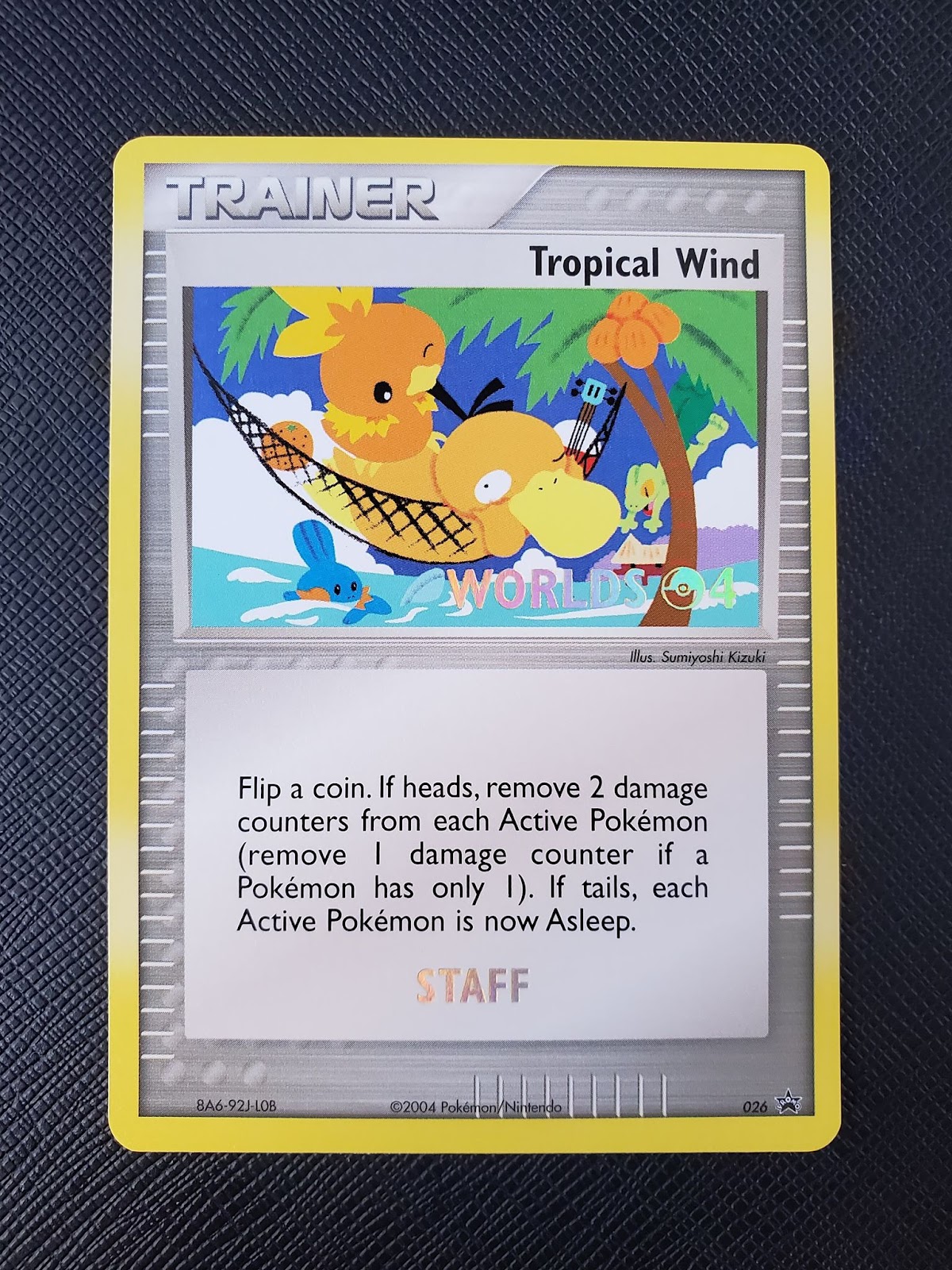 To this day, this is the format used for all Worlds promos.

Worlds promos have always been well-received, but niche. The historic importance of the 2004 Tropical Wind has always made it a desirable card, but later editions have long struggled to earn significant figures or find stable liquidity. Between 2006 and 2015, nearly every year of the promos were available for sale at any given time. The values held at $50-75 for a complete players’ set with inserts and the STAFF versions earned $40-50. These prices did not change significantly throughout these releases with the exception of Tropical Beach, the promos from 2011 and 2012, which I’ll elaborate on later.

In 2015, the upturn in the Pokemon Trading Card Game market, in general, brought more collectors, more money, and more attention. The market began to dry up on Worlds promos. This wasn't a surprising result as the rarity of the cards had never been adequately reflected be the market availability for copies distributed between 2005 and 2015.

What makes them special?

There isn’t much about these promos that ISN’T special. Each card is uniquely numbered within the broader black star promo set. The artwork is exclusive to each year’s promo and is never reused or appropriated for non-Worlds releases. That means to get a Champions Festival or Tropical Wind, you HAVE to have the version only given to people who were a part of that year’s festivities, be they a player or a staff member.


The naming convention for the Worlds Promos has changed with time. They were named as follows:

Some copies stick out even among the Worlds promos. The most popular copies to collect are STAFF promos. These are more plentiful than the unstamped competitor copies, as many staff members receive multiples, and are also popular because they do not require you to break up a set of all the languages from each year in order to collect your preferred type. The rarest copies are the “Champion” stamped versions, given only to the winners of each age division in the Trading Card and Video Game events. These are proper trophies in their own right and are often sought as an entry-level goal into the broader trophy card niche. 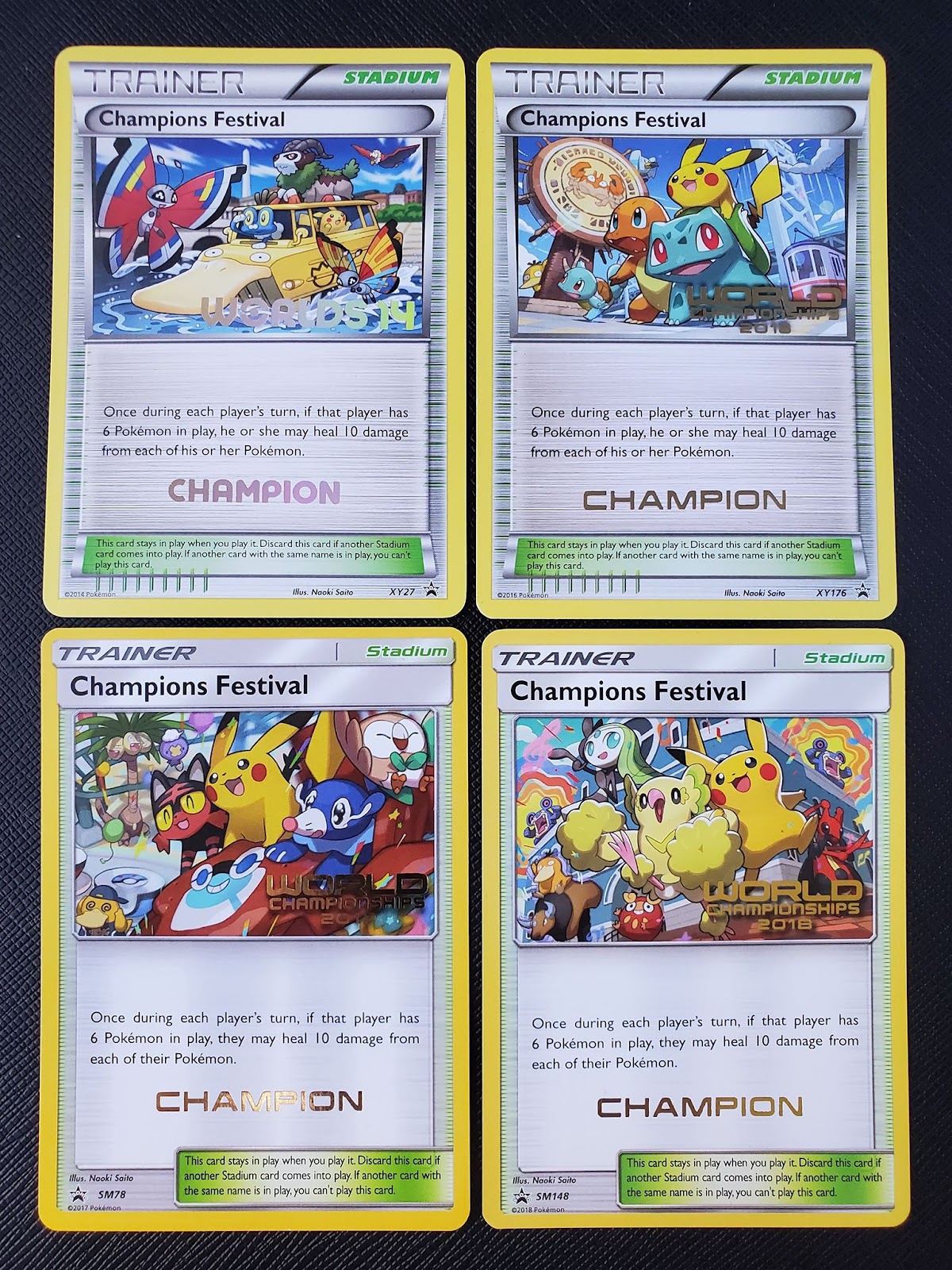 Close behind Champions are Finalist copies. Many years only go up to Finalist, as the Champion wasn’t introduced until 2012. In total, the stamped competitor copies include a Top Sixteen, Top Thirty-Two, Quarter-Finalist, Semi-Finalist, Finalist, and Champion. 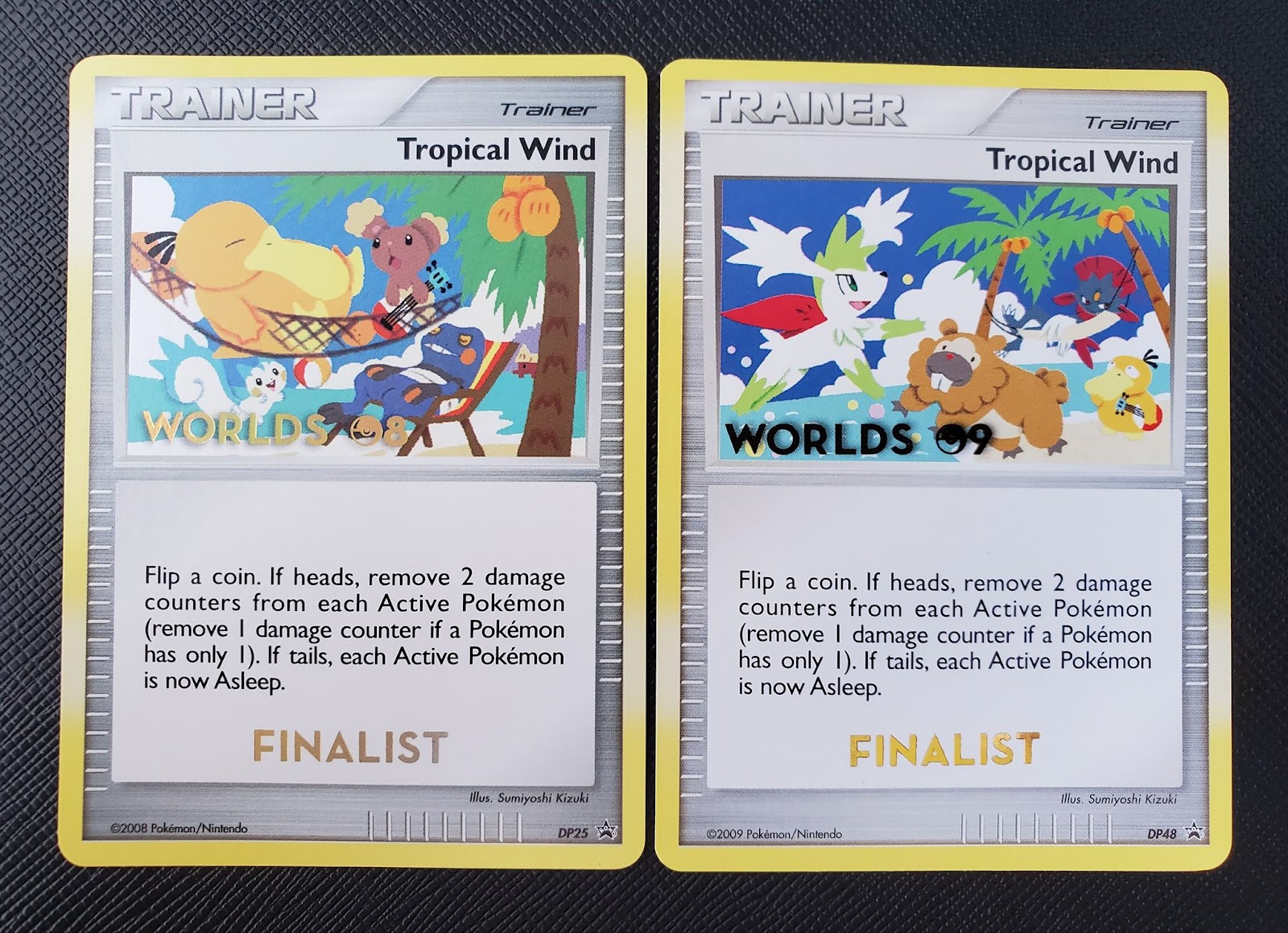 2004 is historically the most important from a collecting perspective, as I’ve mentioned above. But for players, the most important is likely the Tropical Beach promos from 2011 and 2012. This was the first time that a Worlds promo was made playable. Because the cards were in high demand for players, many are in bad shape from heavy use. But even in poor shape, the cards command over $200 each for any English version because of their playability in extended format (and previously in standard format). 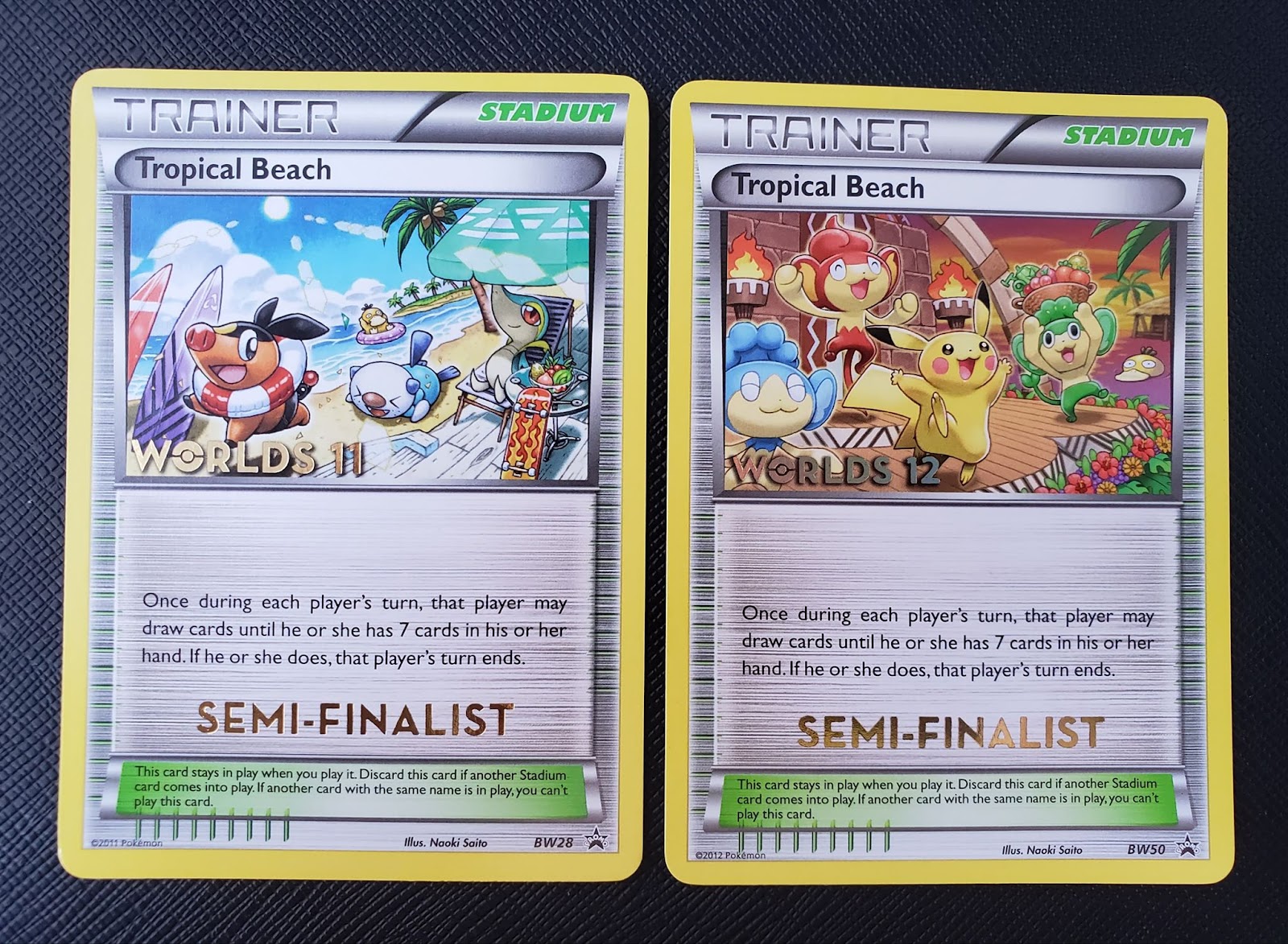 Why is it growing now?

There were two major shifts in the market between 2015 and now. First, there was a massive influx of interest and activity that occurred between 2015 and 2017. This caused a lot of prices to increase and a lot of old players to get back into the game. With them came their Worlds promos. Between 2017 and now, some of the market has settled again. In particular, we can look at the values of PSA 9 Wizards of the Coast holos to see how that influx in availability has brought down prices. But unlike set cards, Worlds promos have relatively minuscule distribution. There simply aren’t enough to satisfy the broad interest. Though the interest in Pokemon promos is smaller than the interest in vintage sets, the disparity between availability and interest is much wider amongst rare promos. So where 2015-2017 brought out many hiding sets and buyers, 2017-2019 has seen the supply mostly evaporate.

Dwindling supply has increased prices on Worlds promos that stagnated for a decade. And with that rarity and taste for the chase comes more interest from competitive collectors. Worlds Promos are also natural parts of conversations about trophy cards, which have seen their prices increase dramatically within the same timeframe, complimenting this growth trend.

Worlds Promos have always been some of the coolest cards in the game. Their artwork is whimsical and unique. Each promo tells a story, incorporating elements of the locations of the events, especially after the shift to Champions Festival. The cards are rare, worthy of any collector’s veneration. And they’re tough to score in a PSA 10 condition due to their haphazard distribution. It is awesome to see the market catch up with how cool Worlds Promos are. In Worlds promos, you get a taste of trophy, rare release, vintage, and ongoing sets. This is an emerging market that was due for some spotlight and the sky is the limit for where they’ll go next. 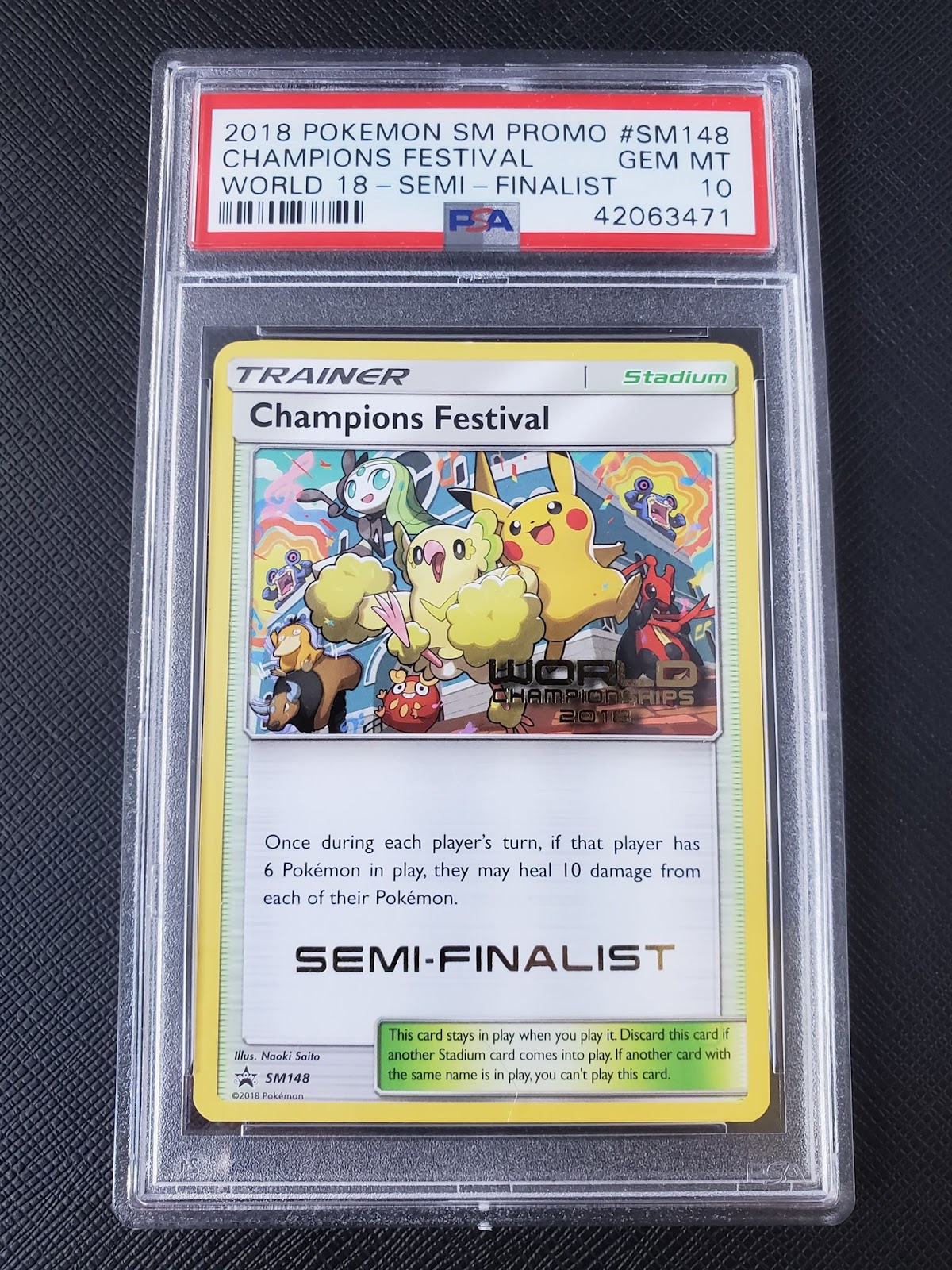