There is a divide occurring in the Pokemon marketplace that it would be wise to become aware of. The hobby used to be approachable by everyone. There were no cards priced higher than a few thousand dollars each. With research, intelligence, and effort, any collector could potentially gain access to even the rarest cards. This was the narrative of the past (pre-2009) but the tides are turning and we need to prepare ourselves. Let’s talk about the recent sale with Iconic Auctions and what it is indicative of. PSA 10 1st Edition Base Set value growth is not a foreign concept to anyone that has been paying attention. We’ve all been watching the Charizard grow from a modest $5,000 card in 2012 to an astounding $18,000+ card today. That in itself has driven the hopes of a complete PSA 10 1st Edition Base Set out of many collector’s minds. However, this is not enough to keep everyone away. There is still a large section of the population that can afford, with some time, effort, and saving, to purchase a complete set in the $30-40,000 range. But the complete set just recently auctioned threatens to push complete sets entirely out of range for all but the most wealthy collectors. 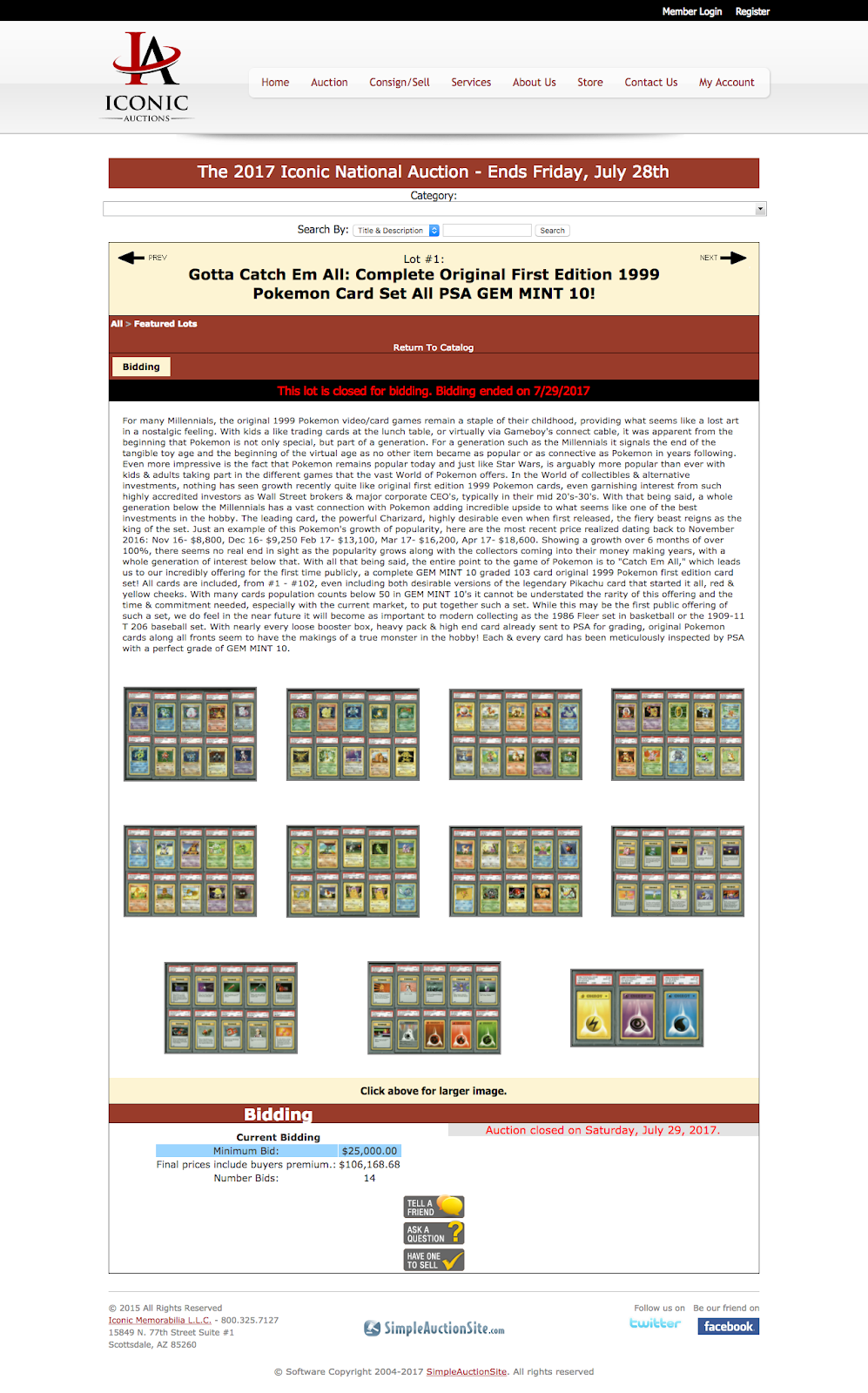 It should first be established that the 1st Edition Base Set in English is the most universally desirable set. Period. Niche items like trophy cards, old Japanese promos, and limited run English promos can be well-known, highly valued, sought after, so on and so forth but they are not even on the same tier as the English 1st Edition Base Set. Anyone that has the faintest knowledge of Pokemon cards has likely encountered the Base Set. And of those people, if they’re actively pursuing collecting, you can be certain the majority are interested in obtaining base set cards. Now amplify that. Take the most desirable set (base), in the highest rarity (1st Edition), in the best condition (PSA 10), and in the most complete form and it starts to make sense why this auction has peaked through the $100,000 threshold.

It is also worth noting that this new tier of pricing is not out of the blue. As is the case with all of the rarest items, there was a seesaw effect over time. The cards existed in relative balance with the demand only a few years ago. Eventually, the supply dipped below the demand, the prices rose, new copies entered the market to capitalize on the price increase, those were purchased and held, and the balance was struck again. This repeated itself several times until last year when we saw it happening more dramatically. The first real jump for the PSA 10 1st Edition Base Set Charizard, for example, was from $5,000 to $10,000. I point this out because we need to note that this is still a paced increase. It took the right conditions over a decade and a half for the price to get to $10,000. This next jump into the $20,000 range is not yet complete but it also has taken a full year, a huge influx of interest in the hobby, and a back and forth motion between supply and demand.

A partial explanation for the dramatic increase in prices is the increased reluctance to sell from those holding copies they’d consider moving under other circumstances. With prices realizing 100% increases over the last year, there is an increased hesitancy to sell. This will likely change when the price comes to rest. In the meantime, extra tendency to hold will most likely exaggerate the price increase in the short run. This does not mean that the prices are going to come back down or that they are somehow illegitimate. It only means that new copies of the more scarce cards are not likely to evaporate entirely. It would be reasonable to expect them to continue trickling into the market until they end up in more permanent hands.

Who are the new buyers?

You may be familiar with the basic logic underlying the trends I’ve identified thus far. These are self-evident truths that pertain to pretty much all movement in all collectible markets. However, you might not realize that the buyers are not entirely the same as they were before. We are now competing with speculators and sports card collectors. This is not the narrative we are used to. The story always went that Pokemon card collectors would grow up, get jobs, buy the cards they dreamed of, and the prices would increase by the means of those few. To be fair, this is not an entirely false analysis. I would attribute the growth in PSA 10 black star promos, Jungle and Fossil boxes, and similarly accessible but valuable items to these types of trends. But it is not your average Joe who got a good factory job bidding $100,000 on a PSA 10 1st Edition Base Set.

Let me explain it this way: It is not a coincidence that Martin Shkreli got into vintage Magic. When you sell a card at $100 when you only paid $10, you get excited. As this dramatic growth becomes increasingly feasible, there is more interest in taking advantage of the opportunity. A perk that we enjoy in our hobby is often not needing to claim that $90 profit on taxes. We ought to but the cash transactions are impossible for a government to track. The goods are not registered with the government and their value is not tracked by any central source. Buying and selling non-sports trading cards is not regulated. If you have $90 on the line, this is great. If you have $1,000,000 on the line, this is unparalleled. Welcome: speculators.

The people buying these cards up are not your buddy. In fact, most of them go to great lengths to maintain their anonymity. They are investment bankers. They are people looking to move money over borders without catching attention. They are wealthy individuals offsetting business costs from other ventures they have. We joke that cards are “printed money” but in many ways, they are a currency. Their values are stable but they don’t come with serial numbers. Before you get too spooked, I want to be clear that this is not all illegitimate. The Mob most likely isn’t buying up PSA 10 1st Edition Base Set holos. But there are people with an aggressive, financial interest in the cards that weren’t around five years ago and they bring new rules with them.

In addition to all of the aspects I’ve noted that draw in speculators and outside money, Pokemon has the advantage of a limited but accessible supply. Vintage magic is plagued by hoarders who manipulate the market for a profit and make the game inaccessible to most people. Pokemon had more cards so it took longer but the same games are being and will be played. We need to be ready, as collectors, to weather this shift in the politics of Pokemon.

On a lighter-hearted note, Pokemon is growing in recognition and legitimacy. Adults are buying and selling the cards to each other. Playground trades were cute but the fight for the nostalgic, cardboard remains can be bitter. Ultimately, the biggest check will win in most instances. Sports collectors are coming from a world where growth is limited. Modern sports cards are contrived, poor investments, and producing very few market breakaway successes for value returned. The leap from Mickey Mantle to Charizard is a small one and we are seeing the first hops.

Non-sports cards have an extensive history. Trading cards started as non-sports and only later depicted famous sports figures. Throughout the production of sports cards, there have been inserts, series, and paired products featuring non-sports cards. As such, sports collectors are often privy to non-sports cards. The modern TCG scene is built on nostalgic premises similar to what draws in the sports collectors. While Pokemon cards won’t ever be for all sports fans, they can be and often are attractive to people in sports cards for the sake of collecting. Pokemon cards are forcing sports collectors to notice them as they seep into the same auction houses and magazines. I bring up sports collectors because they tend to be older, wealthier, and more adjusted to markets with high prices when compared to the average Pokemon card collector. As such, they will be more apt to pay the high prices that come around. These new buyers aren’t dependent on the payment plans and friendly trust that used to frequently occur between old Pokemon friends. Additionally, the hobby has grown so dramatically that we can’t know everyone in the high end collecting scene like we used to. More high dollar sales are going to people with the means and interest in paying immediately. This is good for the hobby ultimately but requires adjustment for those who have been around for a long time.

$100,000 is a new marker for the Pokemon collecting world but it is not an anomaly. The high prices we see are the product of twenty years of growth and development. New buyers bring new money and expectations into the hobby that will necessarily affect your experiences. This can either be an enjoyable experience or a painful one depending on where your means and goals fall in line with the development of the prices. In either event, this is the new reality that we should all be ready for. Catching them all just got a lot more expensive but the changes bring with them increased value, stability, and hobby longevity.